Julian champions the case for a new railway station at Haxby 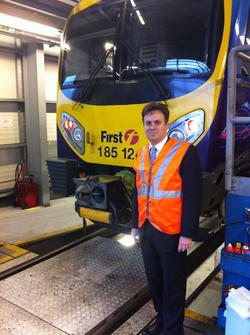 Today in Parliament Julian championed the case for funding a new rail station in Haxby.

Speaking in the House of Commons during the Transport Questions debate, Julian asked
“Will the Minister give me an assurance that the new stations fund will be accessible to applications from all councils?

“As she knows, the proposal for a new station at Haxby in my constituency has one of the strongest business cases anywhere in the north of England, and my constituents would benefit hugely from such a station.”

Responding the Rail Minister Claire Perry assured Julian that she “would be delighted to review that matter with my Honourable Friend. The new stations fund announced in the Budget is of course open to all applicants.”

In the Chancellor’s Summer Budget £20 million was allocated for the construction of new railway stations. Julian met with Ms Perry earlier in the year to discuss plans for a new station at Haxby, which is recognised as one of the leading candidates for funding in the North of England.

Julian has said he will continue to work closely with the Government, York Council, Local Enterprise Partnerships, and local residents to progress the case for funding.