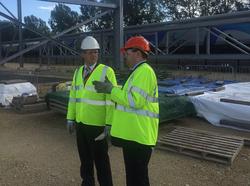 Julian has recently toured Drax Power Station near Selby to find out more about the company’s movement away from coal and towards biomass as a reliable form of renewable energy.

Drax Group plc, which directly employs 1400 people, has been steadily increasing its use of wood pellets in place of coal for several years. It is now the largest decarbonisation project in Europe, providing 7-8% of the UK’s typical electricity demand and 12% of the UK’s renewable power in 2014.

On the units that have been converted from burning coal to wood pellets, the firm have achieved carbon savings of 86%. Julian noted that, unlike intermittent forms of renewable energy, biomass is always available and does not have any hidden costs. By converting existing coal-fired units to biomass, the technology makes the most of the existing infrastructure and there are no new connection costs. Similarly, they have lower balancing costs as, just like coal power, they can be flexible in response to demand and reduce the need for the National Grid to intervene at additional cost to bill payers.

Julian, who serves on the House of Commons’ Energy and Climate Change Select Committee, has long been a critic of the intermittency of onshore wind power and recently ran a successful campaign against taxpayer funds being used to subsidise onshore wind turbines.

“I was delighted to have the opportunity to visit Drax Power Station and find out more about their innovative transformation towards renewable energy production. It’s clear to me that biomass is a more reliable, affordable and sustainable form of energy than many other renewables.

“Onshore wind, for example, is riddled with hidden connection costs. It is intermittent, generating electricity approximately only 30% of the time, and as a result it requires back-up forms of energy which must sit idle when the wind is up – again adding to the hidden costs.

“The biomass itself is sourced from commercially managed forests that are sustainably harvested, using only low value wood and forest, sawmill and agricultural residues.

“The Department for Energy and Climate Change estimate that it would cost an additional £44billion to achieve the UK’s 2050 carbon reduction targets without the use of sustainable biomass, so for me it is absolutely essential that this low carbon technology plays an increasingly important role in our balanced energy mix.”