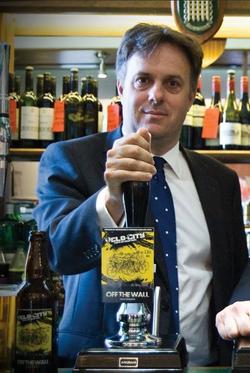 After campaigning long and hard for the Tour de France to come to Yorkshire, Julian is delighted that the event is about to take place on our city streets. After the highs (and lows) of the tennis, cricket and football, Julian is now looking forward to watching the world’s best cyclists in action and will be cheering our athletes all the way to the finishing line.

York Brewery is the Tour de France’s official regional sponsor and has brewed a bespoke ‘Velo-City’ beer to celebrate the fantastic sporting occasion. Julian spent several hours of the brewery helping with the production of the beer. Julian also hosted York Brewery in Parliament this week and the Velo-City beer will now be available on tap at the Strangers’ Bar, allowing visitors to enjoy an authentic Yorkshire pint throughout the cycling event.

Speaking at the event, Julian said, “As a North Yorkshire farmer who grows barley for the malting industry, it was a pleasure to organise York Brewery’s visit to Westminster and lobby Parliament’s bar to stock their exceptional beer. It was also a huge privilege to help with the brewing process of the blend of Yorkshire malt and French hops and taste the end result.

“As the Tour de France comes to York, it is vitally important to promote our local businesses and food industry. Yorkshire has a proud culinary heritage and we should celebrate the fact that we have so many family-run food and drink businesses on our doorstep, of which York Brewery is a fantastic example.”

Julian helping to make the Velo-City beer at York Brewery