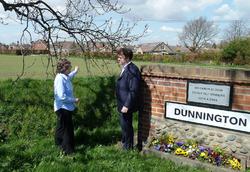 Julian has this morning called on the Local Government Minister, Brandon Lewis MP, to provide local Councils with clearer guidance on what is acceptable when making provision for Gypsies and Travellers.

Julian has been a strident opponent of the City of York Council’s draft Local Plan proposals to provide over 80 Gypsy, Traveller and Showpeople pitches across the York area over the next 15 years.  He has accused the Council of “irresponsible and complacent conduct”, claiming they have over-inflated the accommodation needs of the Travelling community and intentionally ignored Government guidance by proposing sites on greenbelt land.

In a Parliamentary debate on Gypsy and Traveller Policy this morning, Julian called on the Government to reiterate the protections that are afforded to greenbelts, claiming that the City of York Council had displayed a “blatant disregard for the greenbelt” when allocating sites.

Mr Lewis also responded to Julian’s concerns over the City of York Council’s inclusion of Travellers living in bricks and mortar housing in their accommodation needs assessment, saying:

“We want to ensure fairness in the system, and I stress that we announced our intention to consult later this year on whether the planning definition of Travellers should refer only to those who actually travel and have a mobile or transitory lifestyle. If someone has ceased to travel, it is right to ask whether they should be treated as a Traveller for planning purposes, and we will be seeking answers to that question.

Following the debate, Julian welcomed the Minister’s comments and said:

“I was glad to hear the Government have reiterated their firm position on the need for Travellers sites to be in appropriate locations and not on greenbelt land. My only hope is that the City of York Council have listened to the clear statements he has made and will act upon his advice by revising the proposals within their Local Plan. I also welcome the Minister’s intention to review the definition of ‘Travellers’ to ensure that local Councils’ needs assessments are accurate.”