Julian Calls on Chancellor to Continue Investment in Broadband Infrastructure 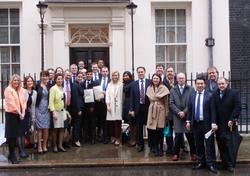 Julian has joined with over 100 cross-party MPs and Lords to urge the Chancellor continue investing in fixed and mobile broadband as part of the Spending Review and in the future.

The open letter was co-ordinated by the All Party Parliamentary Group for Broadband and Digital Communication, of which Julian is a strong supporter.

Julian and the signatories welcomed the Prime Minister’s announcement of a Universal Service Obligation for broadband of at least 10Mbps by 2020, but highlighted that 17 per cent of the UK still does not currently have the option of a superfast broadband connection and, even worse, some 500,000 households still lack even basic broadband.

As the letter explains to the Chancellor:

‘We urge you to consider the importance of continued state investment in both mobile and fixed broadband infrastructure as part of the Spending Review, so that the digital divide does not widen and deepen, and so that we can provide the same digital opportunities to everyone in the UK, regardless of where they live.

‘Continued investment will ensure that we will not split the superconnected from those for whom the 21st century economy is another country. We urge you to invest in creating one digital nation.’

Alongside several colleagues, Julian visited No.11 Downing Street to hand deliver the letter to the Chancellor.

“Here in York, the roll out of superfast broadband has been a great success with almost 97% of properties now connected to a fibre-enabled cabinet, and further progress being made each day with the Gigabit City project. However, I remain deeply concerned about the final 3%, which includes communities like Askham Bryan, Askham Richard, Hessay and Acaster Malbis and the growing digital divide between them and their urban counterparts in York.

“Studies have shown that for every £1 invested by the Government in our broadband infrastructure, the UK economy will benefit by £20. The Chancellor absolutely must continue the pace of investment in superfast broadband, not just for the benefit of the York Outer communities, but for the country as a whole.”

Pictured: Julian with Parliamentary Colleagues at 11 Downing Street, delivering the letter to the Chancellor.