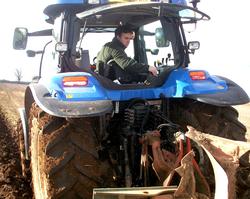 York Outer MP Julian Sturdy has called on the Government to recognise York’s “huge potential to become a global leader in the food manufacturing, agri-tech and biorenewables industries”.

In the House of Commons, Julian promoted the region’s suitability as a future international centre of excellence. He said: “I welcome the Government’s commitment to encouraging the nation’s agri-tech industry and to recognising the importance of food security. The Minister and the Secretary of State will no doubt be aware of York and North Yorkshire’s huge potential to become a global leader in food manufacturing, agri-tech and biorenewables industries. As such, will the Minister clarify whether there are any plans to announce further catapult centres in this field?”

In his response, the Science Minister, David Willets MP, raised hopes of York receiving large amounts of government funding to become an international leader in life sciences. The Minister went on to say “There is a lot of interest in our new centres for agricultural innovation. We expect to announce the bidding process for the first one in the spring and we will consult on themes for the other centres. I congratulate my hon. Friend on reminding us of the case for York as a possible centre. Of course, my right hon. Friend the Secretary of State was brought up there, but we will try not to allow that to affect our decision.”

En route back to his constituency office in York, Julian commented that he was pleased with the Minister’s response. He added “I first highlighted the region’s potential as a centre for excellence in agriculture back in 2010, when I raised the matter in Parliament and met with the then Secretary of State for the Environment, Caroline Spelman MP, to discuss my proposals.

A similar scheme was established in Montpellier in France which has since grown into an internationally recognised hub for food science and biodiversity. In Britain we often take our exceptional farm produce for granted and with the extraordinary range of research facilities, laboratories and industry expertise on our doorstep, we really do have the potential to lead the world in state of the art agri-technology.

There is still a long way to go however and I will be lobbying hard for York and North Yorkshire to be considered as a future centre of agricultural innovation. I will be meeting with the area’s Local Enterprise Partnership to discuss how best to progress our case and will be corresponding with the Minister shortly.”