Julian calls for rural beauty of villages to be recognised 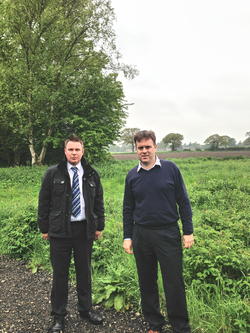 Julian has come out in praise of the village of Strensall, its strong sense of community and its beautiful open rural setting when taking part in a consultation on a new Village Design Statement.

The Design Statement is being written by a group of Strensall residents who are seeking to establish and protect the village’s key features and identity.

The move comes as the City of York Council have proposed to expand Strensall village and set aside the 70 acre ‘green lung’ at its centre for future long term development as part of their draft Local Plan. The controversial proposals within the draft Plan have met with considerable resistance among Strensall residents and the Parish Council.

Julian said:“I applaud the residents of Strensall and Towthorpe for taking steps towards creating their own Village Design Statement. These Statements clearly set out what local residents like about their community and what they want to protect. I was really encouraged by the working group’s desire to seek the views of local residents and I was honoured that they had also sought my input.

“To me, Strensall is a very pleasant village surrounded by beautiful, open, rural countryside and woodland which is home to really important wildlife. In my mind this absolutely must be protected. As must the ‘green lung’ in the village which the City of York Council seem set on developing. Despite gradual expansion over the years, Strensall has retained its sense of identity and community spirit and I would not want to see this threatened by further large scale expansion. It would also threaten the village’s amenities, like the fantastic Robert Wilkinson School, which may be pushed to breaking point with the addition of many more homes.”

Local Councillor Paul Doughty, who also took part in the VDS consultation, said: “Unlike the ruling City Council administration, the VDS team have shown great enthusiasm in striving to ensure the character of the village is preserved with future developments and I thank them for their sterling efforts. They are right to point out that the population of Strensall has already doubled in little over 25 years. As a resident of the village myself, I say it’s about time we ‘put the brakes on’ before our local environment is spoiled for future generations. Their questionnaire recently dropped through our letter boxes and I am sure they won’t mind me giving a plug to their website, where I am sure they will be delighted to hear more input from residents in the village to make this a truly representative document from the residents of our ward”.