Julian Calls for Rethink on Proposed Bus Reductions in Rufforth 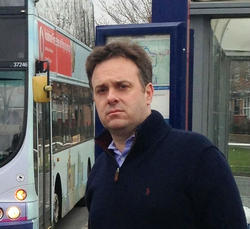 North Yorkshire County Council has proposed a number of changes to their subsidised bus services across the county, in order to try to achieve budget savings of £1.1m. The proposed changes, which are out for consultation until Monday, include reductions to the 412/413 service in Rufforth and will see buses in the village halved in frequency for large parts of the day. The proposed removal of three buses in each direction on the Wetherby to York service will mean that buses during the daytime will decrease from the hourly frequency down to every two hours.

However, Julian has called on the County Council to rethink the proposed reductions that will impact on the community in Rufforth, labelling them “disproportionate”. He has also highlighted concerns over proposed reductions to the 29 service which runs along the A19 past the village of Skelton and through Rawcliffe to the City Centre.

In a letter to the County Council’s Director of Business and Environmental Services, Julian wrote:

“I understand and appreciate the pressures on the Council’s budget and why you are looking to reduce the amount spent on supporting bus services in the county. However, my constituents and I feel that the withdrawal of some buses on the 412 and the scrapping altogether of the 413… is a dramatic reduction in the basic services that rural communities, such as Rufforth and the neighbouring villages, rely heavily on.”

Commenting on the proposals, Julian said:

“I have been campaigning for better bus services in York Outer for some time now, as I know very well that regular and reliable public transport links are a real lifeline to our rural communities. As with any bus service reductions, I fear that the proposed changes will ultimately lead to a decline in patronage which may be used to support further cutbacks in the future. All the while our rural communities, who rely so heavily on good bus services, are bearing the brunt of this vicious cycle.

“The County Council’s proposals will have a dramatic impact on Rufforth, which relies on the 412/413 as the only bus service stopping in the village and in my mind the cutbacks are disproportionate when compared to the reductions that other North Yorkshire communities are facing. I have made my views known as part of the consultation and I will also be writing to the City of York Council to see what they’re doing to ensure residents in Rufforth don’t lose out as a result of these changes.”

For further information on the proposed changes, click here or to take part in the online consultation, click here.