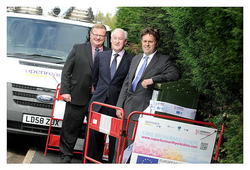 Julian has today urged the government to allow a second tranche of funding for the roll out of superfast broadband to be released earlier than previously scheduled.

Phase 1 of the roll out of superfast broadband is expected to be completed in North Yorkshire by the end of 2014 and will provide 90% of households in the region with speeds of up to 25mbps. The remaining 10% are expected to receive speeds of at least 2mbps. At this stage, Phase 2 funding, which will extend coverage further, is not expected to be released until April 2015 at the earliest and potentially not until 2016.

Speaking in the House of Commons during Culture, Media and Sport questions, Julian said:

“The Minister will be aware that North Yorkshire has taken great strides in rolling out superfast broadband across the county. The project is near completion. Will the Minister consider early release of the Phase 2 funding for areas such as North Yorkshire to help bridge the digital divide in those areas?”

In his response to Julian’s question, Ed Vaizey MP, the Minister responsible for Culture, Communications and Creative Industries, said:

“May I use this opportunity to congratulate North Yorkshire on forging ahead with the superfast broadband programme, which has made astonishing progress. I hear what my hon. Friend says. We are working out the details of how to allocate the next tranche of funding to take superfast broadband to 95% and I will keep him informed.”

Reflecting on what was said in the House, Julian commented:

“I welcome the news that the government are considering how best to allocate the next tranche of funding, which will extend next generational access from 90% to 95% of households. However, we know how important superfast broadband is to our local communities and it is vital that we look to close the digital divide. As such, I will not be resting on my laurels over this issue and I will continue to push for an early release of North Yorkshire and York’s share of this money, in recognition of the hard work that’s being put in to ensure that Phase 1 of the roll out is completed before schedule in our region.

“Despite the progress that has been made in North Yorkshire, there are still some communities in my constituency, such as Askham Bryan, Askham Richard and Hessay, which are sadly not benefitting from superfast internet speeds. Further funding on its own may not solve all our problems. As such, I will also continue to push for different technologies, such as fixed wireless and fibre-to-the-home, to be deployed to help bridge the digital divide.”