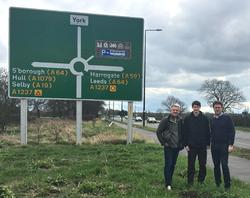 Julian has today reaffirmed his hopes of securing a permanent solution to York’s congestion problems on the outer ring road as part of his six point plan for the constituency.

Having raised the matter with the Prime Minister, who himself described the outer ring road as a “car park”, Julian organised a roundtable meeting with the Department of Transport in the final week of Parliament. This was attended by representatives from some of York’s leading businesses and decision makers, including Nestlé and the Local Enterprise Partnership.

Following the meeting, the Department of Transport made a landmark commitment to investigate a permanent solution to the traffic problems on the outer ring road. The Transport Minister, Robert Goodwill, has since written to the Chief Executive of the Highways Agency, Graham Dalton, requesting that the organisations work together in close co-operation to progress their investment plans for the outer ring road.

Julian has welcomed the £250 million of Government funding to upgrade the busy Hopgrove roundabout to the east of York and to potentially dual the A64 as far as Whitwell-on-the-Hill.

Speaking today, he said “York’s transport problems are undeniably our barrier to further prosperity and economic growth. It is infuriating to see commercial areas being choked off by congestion and businesses being discouraged from coming to York. The Council are pushing for massive housing developments which will only increase pressure to our already busy roads. We need to take action now to prevent our city from grinding to a complete halt.

“It is crucial that a permanent solution is achieved soon, and Labour’s idea of skirting around the issue by only tinkering with the roundabouts on the northern ring road is incredibly short-sighted. I will continue to work in the best interests of local residents who are exasperated by the current situation. We need some joined-up thinking and a common sense approach to York’s housing and transport issues – something which has sadly been lacking from the Council so far.”

Julian has already secured a follow-up meeting with the Transport Secretary, Patrick McLoughlin, to discuss potential funding arrangements in more detail after the election.