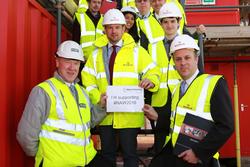 Julian visited The Granary housing development in Clifton Without (also known as the Grain Store site) and met with a number of apprentices to mark National Apprentice Week 2016. Redrow Homes, the developers of the site, are launching their annual apprentice recruitment drive.

Speaking with apprentices, Julian met Tim who is now in his final year and hoping to achieve an NVQ Level 3 in brick-laying this August. Tim is revelling in the opportunity and told Julian: “I’m really enjoying it, it is good. I have met so many people who have helped me a lot.”

Redrow has committed to take on a record number of trade apprentices this year across England and Wales, some of which – like Tim – will be recruited in Yorkshire. Currently the Yorkshire division of has 11 apprentices but will take another nine this year.

To coincide with National Apprenticeship Week (March 14-18) Redrow is launching its annual apprentice recruitment drive through which its representatives will visit schools and colleges up and down the country to talk to young people about the value of trade apprenticeships as a route into successful careers in construction.

“Over the past 12 months our apprenticeship offering has expanded, adding plastering, painting and decorating, groundworks, and customer care, to its training in carpentry, plumbing, electrics and bricklaying.”

Julian was impressed with the apprentices he met and was encouraged by the support they were receiving. Speaking afterwards, Julian said “Providing our young people with the best start to get on in life and have a rewarding career must always be a key priority. 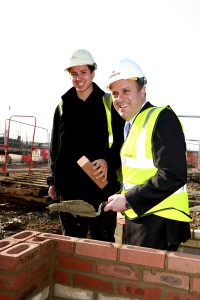