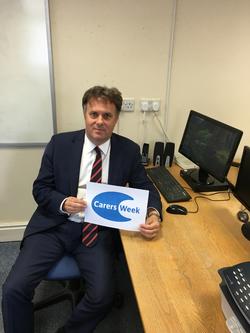 Julian is supporting Carers Week 2018 to highlight the vital contribution people with caring responsibilities make to the city, and to emphasise the importance of them being properly supported.

Carers Week is supported by a coalition of groups including Age UK, Macmillan Cancer Support, the MS Society and Independent Age. The campaign intends to raise awareness of the essential role of carers for families and communities nationwide, and highlight the challenges they face.

6.5 million people across the UK provide care on an unpaid basis for a friend or family member who is elderly, disabled or ill, which often involves them making very considerable sacrifices.

Locally, dedicated support and advice for carers is available from the York Carers Centre, which also offer a carers’ needs assessment to help them establish the right kind of help to offer an individual.

The government also provide financial support for carers, with over £2 billion paid out in carers’ benefits each year, and the rate of carers’ allowance increased since 2010. Measures have also been taken to provide new rights for carers, with the Care Act 2014 imposing a duty on local authorities to meet carers’ eligible needs for support for the first time.

Commenting, Julian said “An estimated 1 in 8 residents of York Outer have caring responsibilities of some kind, and our community simply would not function without them.

Much of the work carers do is invisible, but they make an immeasurable contribution to York. The additional support for carers put in place under the Care Act 2014 is encouraging, but it remains essential for everyone in government both local and national to listen to the needs of carers, so we can ensure older residents and those in poor health are as well looked after as possible. This issue will only become larger as our society ages.

It would be very useful for me to hear from local people with caring responsibilities about what the government or local authority could do to support them better. I encourage any residents who have suggestions or experiences they would like to relate to contact me at any time.”