Julian backs calls for a new station in Haxby 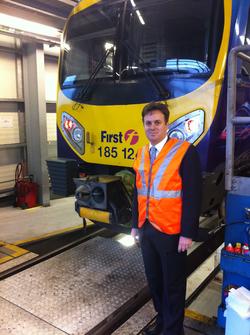 This evening Julian  will be meeting with residents from Haxby and Wigginton to discuss with them their campaign for a train station in Haxby. David Wells from Rail Future will also be present at the meeting and will chair the discussion.

The meeting is part of an ongoing campaign to open a new Haxby Station, on the Scarborough Line, so that local residents have a fast, direct service into York and vehicle congestion in the area is reduced. The village has been without railway links since the 1930s, when the old Haxby Railway Station was closed.

At the meeting this evening, Julian will be updating residents on his recent Transport Roundtable meetings. Julian first set up the Roundtable, in which he has brought together local business leaders, stakeholders and community leaders, in order to create a strategy for improving York’s longstanding transport issues. One of the recommendations proposed by the Roundtable has been to improve rail links in the villages that surround York.

On his meeting this evening, Julian said:

“I am really looking forward to meeting with residents from Haxby and Wigginton to discuss their campaign to get a train station in the village. I passionately believe that residents from these villages and the surrounding area truly deserve better transport links with York city centre than they have at present. Local residents know very well the difficulties they face with congestion on Wigginton Road and the northern by-pass and understandably they’re fed up with the status quo. To make matters worse, First seem to be cutting bus services in the area and leaving residents with fewer and fewer public transport options.

“I welcome the City of York Council’s announcement that they will be bidding for government funding for a new station at Haxby. What’s more, I’m really pleased that the tireless efforts of the campaigners are beginning to pay off. I will be making representations to the government in support of the bid, to outline the hugely beneficial effect a new station could have on my constituents’ quality of life.”