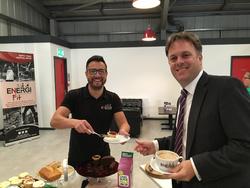 Julian recently went along to a charity coffee morning hosted at the ENERGI trampoline park by MacMillan Cancer Support.

In 2015 Macmillan reached a total of 5.8 million people in the UK, and the annual ‘World’s Biggest Coffee Morning’ raised a massive £25 million; they are aiming to raise even more this year.

Since its inception in 1990 Macmillan coffee mornings have raised over £138 million to fund Macmillan nurse specialists, and their ambition is to be able to provide support to everyone who needs it.

After attending the coffee morning Julian said, “Cancer will affect 1 in 3 people at some point in their lives, and the support offered by Macmillan nurses is absolutely invaluable. I am delighted to have been able to support this incredible campaign.

MacMillan’s philosophy that no one should face cancer alone is very important, and with 4 million people expected to be living with cancer by 2030 we must continue to support the work that charities like Macmillan do to help people and their families who suffer with this terrible disease.”