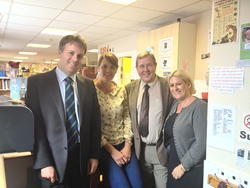 Yesterday, Julian held a parliamentary debate on the Government’s proposals to double the amount of free child care, and the impact it could have on York’s nurseries.

The Government will be doubling the free provision of childcare for three and four-year-olds in England. The current allowance of 15 hours a week will be doubled to 30, saving families as much as £5,000 a year from September 2017. However Julian, who previously raised this issue in a debate two years ago, argued that York nurseries must not be left out of pocket by the Government’s proposals.

Speaking in the debate, Julian said “I have two children of my own, so I am fully aware of how expensive childcare can be. The cost of childcare is one of the biggest barriers that the UK’s 2 million single parents face to finding and staying in work. I therefore want to make it clear that I welcome and support the policy. At the same time, however, I want to offer a word of caution about the policy’s implementation and the impact it could have on nursery providers.”

“I have been approached by several owners of nurseries in my constituency, who have all been keen to get clarity about exactly what the policy will mean for their businesses. Among them were the owners of Station House children’s day nursery in Dunnington and of Polly Anna’s nursery in Haxby. Both providers see the benefits of such a policy, but they agree that providers will be able to offer the increased number of hours only if the funding covers the cost of provision. In many areas, it currently does not.”

Julian argued that according to figures from the National Audit Office, York nurseries currently receive £3.38 an hour from the City of York Council, which is substantially below the national average of £3.95. This leaves York nurseries with a funding shortfall of around £800 a child, with many nurseries having to subsidies their losses through other means.

Responding to Julian’s concerns, the Childcare Minister, Sam Gyimah, said “We need to do more to ensure that we are enabling families to make the choices that are best for their circumstances. In doing so, it is worth recognising, as my hon. Friend implied throughout his speech, that in many cases it is businesses that are delivering these services for parents, so we need to ensure that the funding is sustainable. That is why we have talked about implementing the funding rate for the new 15 hours in a way that is not only fair but sustainable, to ensure—crucially—that children have the best start in life, with affordable, safe and high-quality childcare.

“I am also proud to say that the quality of providers continues to improve. In York, 91% of early years settings are rated as good or outstanding, compared with 80% nationally. That is an encouraging statistic. Additionally, 64% of children in York achieved a good level of development in the early year’s foundation stage profile, compared with 60% nationally in 2014. The Government’s childcare policy will have a direct and significant impact on the lives of children and families throughout the country. It is right that it should be subject to the most thorough scrutiny, such as that from my hon. Friend this afternoon.”

Pictured: Julian Sturdy on a visit to Polly Anna’s Nursery in Haxby