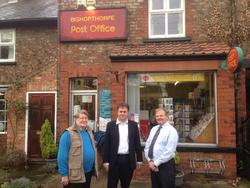 After a long and hard fought campaign, Julian and local Councillor for Bishopthorpe, John Galvin have welcomed the news that the village will retain its Post Office, albeit at a new premises.

The existing facility on Main Street, Bishopthorpe, had been under the threat of permanent closure since December last year, with the Post Office Ltd said to be struggling to find an alternative venue after the Postmaster announced his intention to retire.

Julian and John, working alongside the community, made several representations to senior representatives from the Post Office Ltd in an effort to secure their commitment to keeping the “vital services” in the village. Julian even held a meeting with the company’s Senior Stakeholder Manager in Westminster.

After lengthy negotiations with Rippleglen Ltd, a local newsagency firm, an agreement has now been reached to relocate the branch in February to the Maynews store on Sim Balk Lane in Bishopthorpe, approximately 400m from the existing premises. The facility will operate as one of the new local style Post Office branches, with a serving point located at the shop counter, enabling customers to carry out a wide range of Post Office products and services alongside retail transactions. Customers will also benefit from enhanced opening hours, at 07:00 – 18:30 Monday to Saturday and 07:00 – 12:30 on Sundays.

“I’m absolutely delighted that after several months of campaigning alongside our local MP Julian Sturdy and the community, Bishopthorpe will retain its Post Office for years to come. A special thank you must go to our retiring Postmaster, Glynn Drummond, who’s done a fantastic job in serving the residents of Bishopthorpe for several years.”

“More often than not, Post Offices are at the very heart of our communities, providing important postage, governmental and consumer services, as well as acting as social hubs and meeting places for those who may not otherwise get out very often. I’ll continue working hard to ensure the York Outer communities are able to benefit from improved Post Office services.”

Pictured: John and Julian with the retiring Postmaster, Glynn Drummond at the existing Post Office on Main Street.