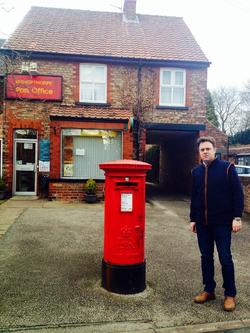 Julian has joined local ward Councillor, John Galvin, in welcoming the news that an agreement has been reached to relocate the Post Office in Bishopthorpe to Maynews newsagents.

The announcements come after months of uncertainty over the future of the Post Office in the village, which could have been withdrawn had no alternative provider been found.

Alongside representatives from the Parish Council and members of the public, Julian and Cllr Galvin made several representations to the Post Office Ltd and met in Westminster and in the constituency with senior managers in an effort to secure their commitment to continuing to provide their essential services in the village.

Yesterday (01 July), the Post Office Ltd began a six week public consultation on its proposal to relocate the amenity from its current site at 25-27 Main Street to Maynews’ premises at 26 Sim Balk Lane. The relocation will also see some modernisation to the way in which the services are offered and will include an extension to the opening hours. Subject to the results of the consultation, the relocation is likely to take place in September or October.

Cllr Galvin said he was “delighted” with the news:

“Over the past few months, a lot of hard work and effort has been put in by the villagers, Julian and myself and I’m really pleased that it seems to have paid off.”

“It has been a pleasure to work alongside several other community representatives in facilitating a future for this vitally important amenity. They are as valuable to our rural communities as village shops and local pubs and I’m really pleased Bishopthorpe looks set to retain its Post Office for years to come. It is not yet a done deal, however and I urge residents to show their support for the proposal as part of the consultation, either by emailing comments@postoffice.co.uk or writing to ‘FREEPOST Your Comments’.”