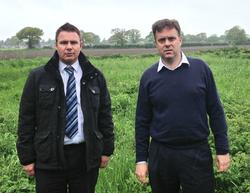 The company who operate the Coastliner, Transdev, had withdrawn three of the evening services returning to the village from the City Centre in October last year with the introduction of the winter timetable. The 2015, 2215 and 2315 services from York Railway Station terminated at Ashley Park in Heworth rather than Stockton-on-the-Forest, Malton or beyond, meaning that the last bus back to Stockton-on-the-Forest left York at 2115.

The winter timetable was met with a public outcry from local residents and Julian and Paul reacted quickly by making several representations to the bus company and the City of York Council. When it became apparent that Transdev and the Council would not come to an agreement on reintroducing these services, Paul and Julian took to the streets to petition the residents of Stockton-on-the-Forest and the nearby hamlet of Hopgrove. Paul formally presented the petition to Full Council and with Julian, submitted it to bosses at Transdev before discussing the matter with them again in a telephone conference.

Transdev agreed to take the concerns into account when formulating the new summer timetable and communications with officers at the City of York Council suggest that the village will, as of 23rd May, be serviced by buses leaving York at 2025, 2125 and 2255.

Welcoming the news, Julian said: “I’m really pleased that Transdev have listened to the strongly expressed views of the community and amended the timetable to reflect the demand for a late night return journey back from the City. These changes are long overdue, but very welcome all the same.”

Paul added: “Stockton residents will now be able to enjoy an evening in the City or do a late shift at work, safe in the knowledge that a public transport option will still be available to them. Regular and reliable bus services are a real lifeline to our rural communities. I hope that the new Coastliner timetable will be more permanent so that residents in Stockton-on-the-Forest won’t have to worry about their evening bus services next winter.”