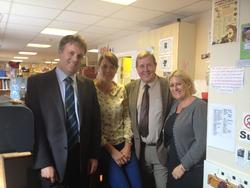 On Monday 17th June, Julian took a delegation of Nursery owners from the constituency down to Westminster, to discuss the problems of Nursery Funding with the Minister for Education and Childcare, Elizabeth Truss MP.

This meeting followed the Nursery Funding Debate that Julian hosted in Westminster Hall on Tuesday the 16th of April. The debate was specifically concerned over the problems surrounding the Free Entitlement scheme the Government provides for 3 to 4 year olds and its impact on local Nurseries.

“I am really happy to have secured this meeting and to have given nursery owners in my constituency the opportunity to discuss their concerns with the Minister in the hopes of securing fairer funding for York. This is a matter that is of great importance to me and has been a concern for quite some time. It is important to remember that local nurseries are also local businesses and, like every other business, they need sufficient cash flow to keep going. Sadly 84% of nurseries claim that the funding they receive does not cover their costs, with the average shortfall of around £547 per child per year.”

“I now await a further letter from the Minister to see whether our meeting has managed to impact on York’s case for fairer funding.”

After the meeting Ken McArthur, from Polly Anna’s Nursery in Haxby, commented:

“We very much appreciated the opportunity to meet with the Minister Elizabeth Truss face-to-face, and to be given the opportunity to explain the challenges we have been facing. We believe that the money we receive does not reflect the huge amount of effort we put into our Nurseries, however I understand that the Minister is bound by previous formulas from the past which gives York a low level of funding compared to other Local Authorities. However she explained that the Department was looking at new models to base funding on which will hopefully give York a better slice of the cake, which is all we really want.

“We also really appreciate the time that Julian has given us, as well as meeting the Minister, he showed us around Parliament and we had the opportunity to sit on the terrace, which was really appreciated by us all.”