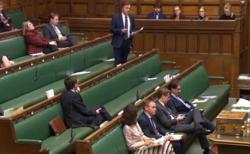 Yesterday, Julian used the first House of Commons debate on the reintroduced Agriculture Bill to defend the interests of Yorkshire communities that will be affected by its impact on the environment and farming.

In his speech, Julian welcomed the broad framework of the proposed new British agriculture policy, which shifts state support for farming from the current EU model of paying farmers by how much land they hold, to paying them for the production of environmental benefits like landscapes, flood defences, clean air and water, and tree planting (‘public money for public goods’), and if they invest in innovation and productivity.

Julian emphasised these new arrangements could be of significant benefit for Yorkshire farmers in upland areas who already spend so much time maintaining traditional landscapes and providing other environmental benefits and “will finally be able to get direct payments for providing public goods such as iconic landscapes, flood defences with upper river catchment management schemes, and maintaining the quality of the 70% of our drinking water that comes from the uplands.” He noted this could include maintaining peatlands, which have an important contribution to make in addressing climate change through their ability to absorb carbon emissions.

Julian also welcomed sensible changes the government made to the Bill text since its first outing in 2018, in response to suggestions from him and other MPs, such as the inclusion of soil health as a ‘public good’ deserving of state support.

In particular, he stressed the importance of the revised Bill’s greater recognition of the centrality of food production to the UK farming sector, with the text now stating state support schemes for agriculture must have regard to encouraging food production, and the creation of a legal duty on the government to report to Parliament on national food security, i.e. the extent to which the UK is reliant on imported food, generally produced to lower animal welfare and environmental standards. Julian said that Ministers should have to report to Parliament more frequently on food security than the proposed 5 year period.

On leaving the House of Commons, Julian said: “The detail of our future farming policy outside the EU is vital for a rural region like North Yorkshire, and has broad environmental and economic significance for everyone. 70% of UK land is farmed, so this new framework will literally shape our country for decades to come. Agriculture is the essential foundation of the UK food and drink industry, our largest manufacturing sector, which contributes over £100 billion annually to the economy, and sustains 4 million jobs, with agri-foods also comprising 6% of British exports.

The dales, moorland and two national parks of North Yorkshire stand to benefit from a shift in government funding to incentivise the provision of environmental benefits, but I will also be watching to ensure these changes do not threaten negative unintended consequences which may drive down the amount of food produced in this country. Equally, UK producers who maintain some of the highest standards in the world should not be forced to compete against lower quality imports, so I will continue to look for reassurance that post-Brexit trade deals do not compromise UK food standards.

I will continue to scrutinise this crucial draft law on behalf of North Yorkshire residents as it progresses through Parliament.”