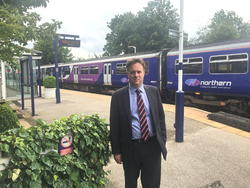 Julian has called on the Government to reopen the York – Beverley railway line. This follows the Secretary of State’s recent announcement stating an intention to expand the rail network.

The line was recommended for closure in the 1963 Beeching report and closed in November 1965. However, the Government has committed to working with local authorities and partners to identify the best new rail projects in order to restore capacity and unlock economic growth.

In correspondence with East Riding of Yorkshire Council earlier this year, Julian was informed that the local authority recognises the benefits that reopening the line could bring to the wider area. However, the provision of funding for reinstating the route would be a matter for the Department for Transport and Network Rail.

Julian has written directly to Mr Chris Grayling, Secretary of State for Transport to make the case for reopening the York – Beverley railway line and this follows a number of written questions submitted in December. In response to these, the Government made clear that proposals would be considered on a case by case basis, based on the economic benefits and business case put forward by local partners.

Speaking recently, Julian said: “There has been quite a sense of excitement following the Minister’s recent announcement and I am encouraged to see a commitment to expanding the rail network.

I think there is a very strong case to be made for reopening the York – Beverley line; it will ease congestion in York city-centre and open up economic development and housing opportunities. It is quite clear that traffic pressures on our city are already unmanageable and rail infrastructure will be in keeping with our rural landscape.

The reinstatement of the line will also make an overwhelming case for the reopening of Haxby Station; allowing five minute rail journeys between the town and York city-centre.”