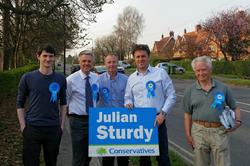 Today, the House of Commons passed a motion for a General Election to be held on 8th June.

Julian commented: “The Prime Minister’s announcement yesterday was certainly unexpected but I do believe that this is the correct decision for our country. Britain needs stability ahead of vital negotiations with the European Union and our government needs to be in the strongest possible position as we begin defining our new position in the world. A General Election will provide the government with its own clear mandate to shape our new relationship with Europe and secure our United Kingdom.

It has been a great privilege to serve my constituents since 2010 and I shall be seeking re-adoption by the local Conservative Association to stand for York Outer again in this election. This is a crucial election for Britain and the choice for voters is very clear.

As your elected Member of Parliament I have fought to protect our Greenbelt, improve broadband, and ensured working parents were able to enjoy 30 hours of funded childcare a year before the rest of the country. The claimant count in York Outer is now the third lowest in Britain and I have been proud to support a Government that has delivered record levels of employment.

However, there is more to be done. We are closer than ever to securing a National Funding Formula that will finally address the historic unfairness in funding for York’s schools, we need commitment to devolution that will ensure greater powers can be conferred to our area and we are able to prioritise significant upgrades to the Northern Ring Road, and it is essential that the right site is identified in York for specialist mental healthcare provision.

This election is not about whether or not we go ahead with Brexit, but about strengthening the government so it can secure the best deal for us all. The British people have spoken and the Prime Minister has triggered Article 50.

Only a strong government led by Theresa May is capable of dealing with the challenges ahead and securing the best future for the people of York. I hope the residents of York Outer will judge me on my local record, and give me the opportunity to represent our city in Parliament for the next 5 years.”