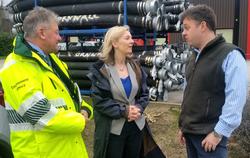 Julian has welcomed the Prime Minister’s announcement that York is to receive £10 million of new funding to improve flood defences in the city.

The funding will be reserved for upgrades to the Foss Barrier, which was overwhelmed at the height of Storm Eva last week. A further £30 million has also been announced for repairing flood defences across Yorkshire, including the River Ouse.

The Prime Minister also pledged that the government would provide more support to charities helping people who have been affected by the flooding by matching every pound of the first £2 million raised. Applications for matched funding can be made by any registered charity that is currently running a fundraising appeal for flood relief in York.

Welcoming the news,  Julian said “Having lobbied hard for additional funding during my meetings with the Secretary of State and the Environment Minister, as well as discussing the matter directly with the Prime Minister’s team; I am delighted by today’s announcement.”

“I will also be meeting with the county’s Flooding Envoy, Robert Goodwill, to ensure that we continue to support local residents and businesses so that they can return home and reopen as quickly as possible.”