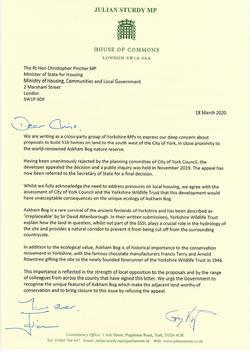 Julian, together with 11 other MPs from across Yorkshire, has today written to the Housing Minister to oppose the development of 516 homes on land adjacent to the Askham Bog Site of Special Scientific Interest (SSSI).

Last year, the planning committee of City of York Council unanimously rejected the application after concerns were raised by the Yorkshire Wildlife Trust of the impact of the development on the unique ecology of Askham Bog. The developer subsequently appealed and after a public inquiry in November, the case has now been referred to the Ministry of Housing, Communities and Local Government for a final decision.

After submitting the letter Julian said :

“As we approach a final decision from the Housing Minister on the Askham Bog appeal, I felt it was important to highlight the strength of feeling not just in York, but across the region.

In our letter, my colleagues and I make clear to the Minister that the land in question plays a crucial role in the conservation of the SSSI and were it to be developed, we would lose the last remaining natural corridor linking the site with the surrounding countryside.

I very much hope that we achieve the right outcome and in the process secure the future of this important piece of Yorkshire’s natural heritage”.