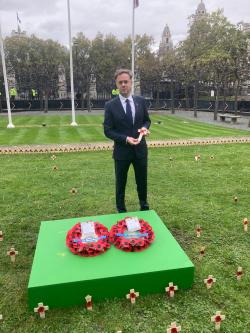 Julian was honoured to lay a tribute at the first ever Constituency Garden of Remembrance in Parliament on behalf of those from York who have lost their lives fighting for our freedoms.

The Speaker, Sir Lindsay Hoyle MP, said he hoped the temporary garden – devised to mark 100 years of Remembrance as we know it – “would be a fitting reminder of the sacrifices made by constituents up and down the country.”

At an inaugural ceremony in New Palace Yard, the Speaker led the planting of Remembrance stakes with a message of gratitude to service personnel from his Chorley constituency.

Other tributes followed – both religious and secular – from MPs, Ministers and representatives from the Commonwealth and British Overseas Territories who also attended the service.

Julian’s fellow MPs have until tomorrow to plant their tribute. When complete, the garden will contain a Remembrance stake representing constituencies in the UK, the 54 member countries of the Commonwealth, and 14 British Overseas Territories.

The first Remembrance Day was held on 11 November 1921, following a campaign led by Earl Haig, Commander-in-Chief of the Army during the First World War, and founder of the British Legion.

This followed the unveiling of the Cenotaph in Whitehall by King George V on 11 November 1920 and the decision to adopt the poppy as a symbol of remembrance.