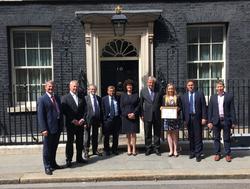 Last week Julian met with a group of constituents and several other MPs to deliver a petition to Downing Street demanding that English patients have access to the same key drug as allowed for patients in Scotland.

The petition had been arranged by GIST Support UK, a charity specifically focused on combating GIST (Gastrointestinal Stromal Tumours). GIST is  a rare and terrible form of cancer commonly found in the digestive system, and the charity believes it is only effectively treated by the drug Regorafenib.

However proposed changes to the Cancer Drugs Fund Standard Operating Procedure threatens GIST patient access to Regorafenib in England, and if implemented in their current format, threatens all rare cancer patients in England from accessing drugs where they are licensed for other more common cancers.

The Cancer Drug Fund consultation recently closed, and Julian has written to both NHS England and the Department of Health asking them to ensure access to rare cancer treatments such as Regorafenib remain in place. Unfortunately since the 23rd June Regorafenib is again on the list of drugs that are being considered for de-listing from the Cancer Drugs Fund on 29th July.

Commenting on the campaign Julian statedsaid:

“This campaign was brought to my attention at the beginning of the year by a constituent, whose   partner suffers from a rare gastro-intestinal tumour. She has now collected over 100,000 signatures in support of Regorafenib’s permanent reinstatement and I am currently trying to secure a meeting with the Health Minister to discuss this further.

“GIST cancer patients already live with the uncertainties that a cancer diagnosis imposes, and the repeated threat of de listing the only effective third-line treatment available to GIST cancer patients, over burdens an already very stressful situation for patients and their families and friends. Especially as there are currently no other drugs yet available to replace Regorafenib.”