Julian has pledged his support for the UK’s biggest mass action environmental campaign, 2020’s ‘Great British Spring Clean’, organised by environment charity Keep Britain Tidy. This will see up to 600,000 people act to clean up streets, beaches and parks across the country between 20th March and 13th April. The campaign unites residents, community groups,

“In 2020 I will focus on ensuring that the government’s plans for improving public...

“I warmly welcome today’s Queen’s Speech, setting out the government’s agenda for the new...

I want to warmly thank everyone who voted to re-elect me as MP for... 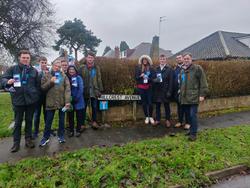 This weekend Julian has been out speaking to local residents north of the city in Haxby, and also in Bishopthorpe and Acaster Malbis to the south.

On the doorsteps he discussed the Conservative commitment to build Northern Powerhouse Rail between Leeds and Manchester to improve regional transport connections, raise the National Insurance threshold to £9500 so people keep more of their earnings, and increase capacity in NHS GP services.

Managing flood risk is an important issue in the riverside village of Acaster Malbis, and Julian assured residents that he will remain active in lobbying to ensure the needs of smaller downstream communities are considered when flood defence plans are being drawn up.