Antibiotic Resistance and its Implications 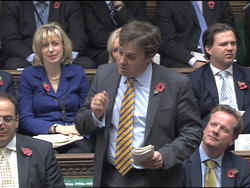 Last week in the House of Commons Julian Sturdy raised the vitally important issue of antibiotic resistance, stressing that this problem is no longer a prediction for the future, it is happening right now and has the potential to affect anyone in any country.

Following the recent report released by the World Health Organisation (WHO) the issue of antibiotic resistance has been picking up pace in Parliament. Julian has welcomed this as he has been concerned about the issue for some time, and will soon be meeting with the head of Helperby Therapeutics Ltd to discuss the matter further.

In response to Julian’s question the Leader of the House, Andrew Lansley replied:

“My hon. Friend is right, and I know of his interest in the matter. This relates to our use of antibiotics not only in human health, but in animal health and how they interact. It is very important to get both right. The Prime Minister rightly stressed the importance of this, which he has discussed with the chief medical officer directly. The chief medical officer made an important report on the subject, in addition to her annual report.

Last year we published the UK’s five-year anti-microbial resistance plan. That is world-leading, but it would be better if we were able to work with others. The World Health Organisation’s report gives us the basis on which to work with others at stimulating the necessary research to develop new antibiotics. If we can make sure that we use antibiotics more sensibly in the meantime, that will prolong far into the future the effective use of the existing supply of antibiotics, the stocks available and the kinds of antibiotics available at present.”

“This is such an important issue right now which can be clearly illustrated if we look at India where currently over 50 percent of bacterial infections in hospitals are resistant to commonly used antibiotics. This is a serious and growing problem in the developing world and will soon be felt in the UK. However, there is currently no funding going into this area, which is of great concern. That is why I want to raise the matter now and I am pleased that other MPs are doing the same.”