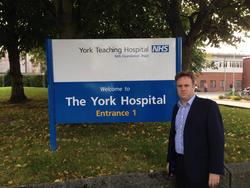 Julian is today marking the 70th anniversary of the foundation of the National Health Service on 5th July 1948. Establishing universal health provision was a lasting historic achievement of the British people in the 20th century, and the health service has become a great national institution.

The creation of the NHS was the result of a broad consensus at the end of the Second World War that the government needed to create a comprehensive healthcare system, free at the point of use, extending and unifying existing services.

This cross-party agreement was the result of the experience of wartime solidarity, and early planning during the Churchill coalition government for a new health system. This reflected a determination that postwar Britain needed to do more to guarantee the welfare of its citizens, and offer them absolute security against ill health.

Commenting this morning, Julian said: “Our health service is vital to providing security and peace of mind to all families nationwide, and symbolises our commitment to care for each other as a community.

First and foremost in our thoughts today should be all those NHS staff, past and present, who have made the NHS what it is, and have done so much for us all. We should also pay tribute to the great Labour Minister of Health, Nye Bevan, who oversaw the creation of the NHS, and his Conservative predecessor Henry Willink, who published the first government proposals for a national health service.

As someone who lives locally with a young family, I very much rely on our local NHS, and am committed to doing my bit to ensure it can always provide the highest standards of care. Our local health service has been one of my main priorities since I was first elected in 2010, and I continue to campaign for improvements on an ongoing basis.

I am glad to support a government which is spending record sums on the health service, and is using this 70th anniversary year to invest in the NHS with a long-term funding plan to allow it to plan for the future with renewed confidence. Last month the Prime Minister announced the government would put an extra £20.5 billion a year into the health service by 2023-24, supporting a 10 year plan for the future of the NHS.

Yesterday, Julian attended an event in Parliament to highlight the amazing work of the health service and its partner organisations, the NHS 70 Parliamentary Awards. Julian along with neighbouring MPs nominated the local charity York Against Cancer, alongside the York Hospital Trust, for the ‘Excellence in Cancer Care Award’, and was delighted to see them make the national shortlist.

York Against Cancer operate Yorkshire’s first mobile chemotherapy unit, making treatment more accessible for those living in outlying areas. The charity has raised £15 million locally over the last three decades, and also runs a minibus service between York and St James’s University Hospital in Leeds, helping local residents to travel to their radiology appointments at this leading cancer centre, covering 16,000 miles every year.

Julian will be attending a choral celebration at York Minister to commemorate the 70th anniversary of the NHS this evening. The Health Secretary Jeremy Hunt will be attending, alongside a large number of staff from the NHS and partner organisations.