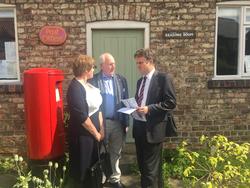 When the solar farm proposal was first announced earlier this year, Julian wrote to all residents in the village to make them aware and to seek the community’s views on the project. The feedback was decidedly mixed with several residents concerned about the impact on the greenbelt and the precedent it would set, whilst others were supportive of using the land to create a more renewable power supply for the existing sewage works.

“I was very pleased to be able to facilitate this important meeting between the community’s representatives, Yorkshire Water and their partners. It is absolutely vital that large scale developments of this nature are preceded by thorough consultation with the communities they affect and I’m pleased that thus far Yorkshire Water have been committed to engaging with local residents.

“I was somewhat disappointed that they had already reached their own conclusions about the site options before consulting on the project. However they were at pains to stress that for a variety of commercial reasons, the brownfield land on the existing site could not be used instead to install the solar panels, primarily because it is needed for future expansion of the sewage works. Yorkshire Water did agree to go away and try to clarify whether the land itself would remain within the greenbelt if the solar panels were installed on it, which may go some way to alleviating the concerns over the potential precedent this development would set.

“A formal planning application is due to be submitted within the next couple of weeks and I will be liaising further with local residents and the Parish Council to ensure that the whole community is aware and able to have its say on what is clearly a very important issue for the village.”

Pictured: Julian with Councillors Suzie Mercer and John Jefferson discussing the proposal at the Reading Rooms in Naburn.